Watch The Webinar! Character Research for a New Age of Storytelling

“Each writer starts differently, but the only valid way is start with character. Character IS plot. Character IS story.” –Eleanor Perry

Great characters are memorable, dimensional, and distinct. They not only move the plot and story forward but they also leave a lasting impression on both creators and audiences. Great characters teach us about ourselves, and share lessons that we can learn to create better stories. Characters are what make and keep audiences, and they are the heart of what transforms a good script into a great one. When translated to the screen, you would be hard-pressed to find a successful movie that doesn’t also have dynamic characters. 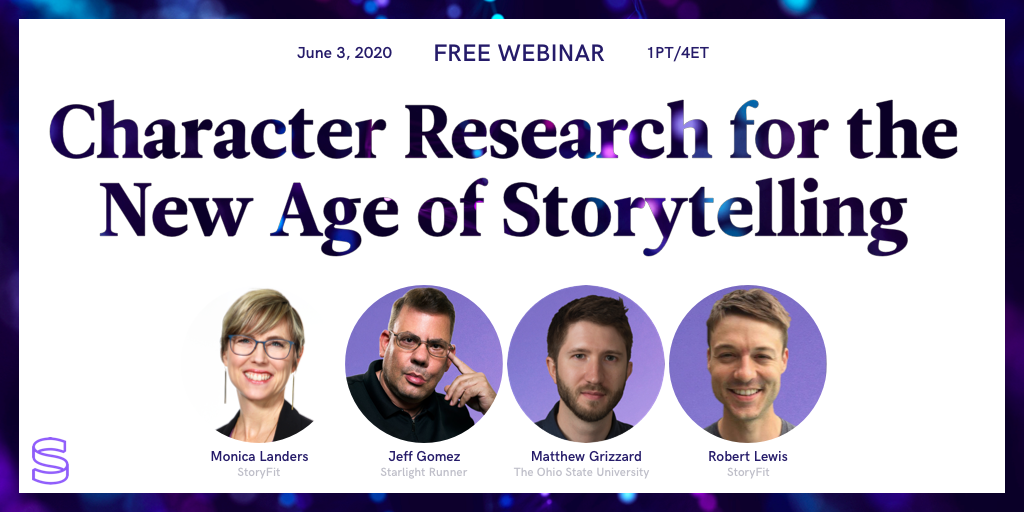 When we were thinking about the topic for our next webinar, understanding what makes memorable characters was at the top of our list. Powerful characters are essential to story success, and many storytellers aren’t aware of how data can be used to measure representation, personalities, interactions, and more. Plenty of research has been done on characters individually and what makes them successful on a singular basis, but we were interested in how interactions and the network between characters bolster their success on a more holistic level.

Once we had the topic, Rob Lewis, P.h.D. and StoryFit’s Media Psychologist, decided to dedicate the month to researching character interactions and how they correlate with box office and episodic success. He was especially curious about the drama genre because it is currently dominating serial productions, and knew instinctively that complex characters drive those series. However, he was also curious about the story, the data would tell, and if any patterns could signal what makes a drama successful.

As you can see from our Character Network representation of the Joker in The Dark Knight, a great deal can be visually understood by looking at a character network. Character networks offer a new perspective on who is occupying the most screen time and which relationships are most central in the story. (If you want a primer on what character networks are, watch this VIDEO with StoryFit’s Customer Success Manager, Kati McKinney.). Rob’s findings on how the complexity of character interactions correlate with success are unique in that they hold regardless of budget or runtime.  If you would like a copy of the whitepaper register HERE.

As part of our ongoing webinar series, we are getting multiple researchers and thought leaders together to talk about how data can help storytellers think in new ways, make smarter decisions, and inform their instincts – so we knew we needed to find additional panelists.

Rob suggested that we include Matthew Grizzard, a fellow Media Psychologist, and Ohio State University Professor. Rob thought Matt’s research on character likability and morality was groundbreaking. Matthew’s specific research has produced a psychometrically valid measure of character morality through the Affective Disposition Theory of Drama. He uncovered some surprising results about how character interdependability positions them morally and how this affects audience reaction and character appeal, especially as it relates to thinking about them holistically. He answers the question of why we are drawn to and interested by certain characters that, in reality, we would be wary of (like Tony Soprano and Walter White, for example). For more Matt’s whitepaper on ADT click HERE.

Lastly, we were thrilled when Jeff Gomez, CEO and transmedia producer at Starlight Runner, agreed to join the panel. His experience working on blockbusters like Avatar, Men in Black, and the Pirates of the Caribbean franchise puts him a league of his own. This expertise on world-building makes his perspective on how data can inform character growth unique.

Jeff is set to discuss a new narrative model that many of the top-streaming and premium network blockbusters have in common (hint: the classic storytelling narratives that we’ve relied on for so long are no longer serving us in this new age of digital media). I don’t want to spoil it because it is such a fascinating presentation, and his model supercharges character dynamics, but if you want a primer, review his Medium blog HERE. (If you do, I’m sure I’ll see you registered for the session.)

Here a couple of quick bullets about what you will learn during the 1-hour webinar:

It’s clear why we can’t stop talking about this webinar! It’s going to be fantastic. Please don’t forget to register, and if you can’t make it, we will send you the recording, and as alway’s don’t forget to share with your colleagues.

“If it’s useful it’s not creepy:” The changing attitude towards AI in the workplace

Why stories matter–and how technology can serve them