How to use StoryFit AI to analyze movie characters

Each StoryFit Content Insights Report delivers specific insights to the most important elements of the story: Major Characters, Major Themes, Action. Dialogue, Emotion and Tone, Locations and Plot features.  In this series we’ll give some examples of real movie scripts that StoryFit’s Artificial Intelligence ingested and what it reveals.

Now that we’ve covered what the StoryFit Content Insights Overview shows, let’s talk character analysis. Here we’ll dive into all of the things you can learn from the character section of the StoryFit Content Insight Reports. Studios and movie professionals use this section in development, casting, and marketing–specifically to inform targeted marketing and early testing of cast and collateral branding.

Each content insight report breaks down the analysis of a movie’s characters over three sections that analyze the number of major and minor characters, the relationships in the story, and the personalities of each character across three sections.

Why does this matter?

Simply put, the knowledge is power, and may mean more profitable or more well-received movies. StoryFit original research found that movies with an even split of dialogue between men and women were more profitable, as well as specific personality traits that are linked to either profit or loss.

Using natural language processing (NLP) we are able to analyze and interpret personality and understand how each major character fits within the larger plot. We look at what they talk about and deliver a detailed analysis of the major characters, including who they interact with most, their emotional displays, and their personality profile. The default view shows all the majors characters and the:

1. Character’s Gender;
2. Percentage of scenes they appear in —  They talk a lot, but are they in a lot of scenes?
3. their share of dialogue —  They speak often, but how much are they contributing overall?
4. Character they interact with most —  Who is the story pairing them with? Is this a buddy comedy? Mother-daughter drama? Love story? Revenge story?
5. Character’s emotional palette —  measures the rates of anger, joy, disgust, sadness, and fear; the larger the circle, the more present the emotion.
6. Character’s personality profile — possible profiles are: introverted, extroverted, cooperative, independent, adventurous, cautious, expressive, and cool-headed.

When a major character’s name or row is clicked, the content insight report expands to show more detailed information about that character. Here you can get the full personality profile and emotional palette: a visualization of the nuance of each character.

What is this character like? Are they the happy hero or the thoughtful guide? What kind of characters do we have to market to an audience?

With these two sections expanded you can start to see the character take shape in an objective context.

The emotions are pretty straightforward, but here’s what we mean when we talk about each:

Anger – Reactions to injustice, conflict, humiliation, negligence or betrayal. If it’s a high value, they are more aggressive verbally and/or physically when encountering conflict. A low value and they are more sullen and quietly tense in conflict situations textbook passive aggressive behavior, essentially.

Joy –feelings of happiness, satisfaction, and pleasure. Scale of overall sense of well being, inner peace, love, safety, and contentment.

Disgust – How much disdain a character exhibits towards their surroundings or others.

Fear– Survival mechanism response. High value means they have extreme phobia or are in extreme danger, low value indicates they are exhibiting caution.

The personality profile gives an idea of the characters’ motivation and objectives within the plot. This is a great way to see if each character is helping propel the story forward, if there are characters who are functionally the same and can be combined, and kickstart casting conversations.

This breaks down the characters, focusing on four major personality measurements. StoryFit’s personality profiles are adapted from the the traditional “Big 5” personality traits–

Openness, Conscientiousness*, Extraversion, Agreeableness and Neuroticism (OCEAN). Using natural language processing, we analyze the dialogue and measure how each characters within the script demonstrated these emotional characteristics.

The only measure we don’t convey is Conscientiousness–measure of someone’s tendency to be thoughtful and organized– because in an analysis of 32,000 characters we found little to no difference or impact of this personality measurement across characters.

Below is a basic description of each personality range.Each personality trait has a different effect on the others. At the end of the article you’ll find a series of tables showing the different implications for the dominant personality and measurements for the other three. 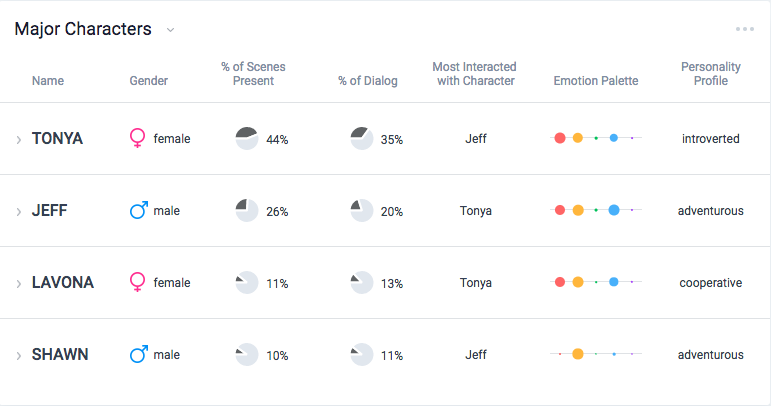 But what about their personalities? Do the StoryFit Content Insights really quantify that?

Yes. Let’s look at Tonya to see how.

Tonya wants to be accepted and prove she’s the best skater. She begins the movie doing whatever the closest authority figure tells her to do, and after a while she begins to get fed up and go her own way, but still playing by the rules as much as she can. Even though her mother and husband abuse her, she keeps letting them back into her life. She waffles between keeping her composure, like when she is repeatadly told how much she doesn’t fit in– and losing her temper, like when she punches a competing skater in the face as a teenager.

The the main personality profile of “introverted,” might seem off for this high-achieving character, but at the end of the day, as she tells a judge in a final scene of the movie, all she really wants to do is skate–here we see she measures right in the middle of the other three traits.

Now turn to Shawn–portrayed in the final movie as a delusional simpleton who tries to convince those around him that he works covertly for the FBI and hatches a “plan” that involved a multi-state fraud operation. The content insights show that pretty much the only emotion he displays is joy, and his personality profile is adventurous, and for all other measurements he lands near the halfway mark: so yes, he is in fact an extremely simplistic character.

Darren Aronofsky’s 2017 psychological thriller Mother! has been discussed, among other things, as a biblical allegory: and .the StoryFit content insights definitely give the argument legs.

Looking at the character breakdown for the God character “Him,” we see that his dominant emotions are joy and sadness, with barely any traces of anger, disgust, or fear. We also see that his personality profile is cooperative, that he’s more introverted than extroverted, more cool-headed than expressive, and he’s as cautious as he is adventurous.

Almost identical to “Him:” 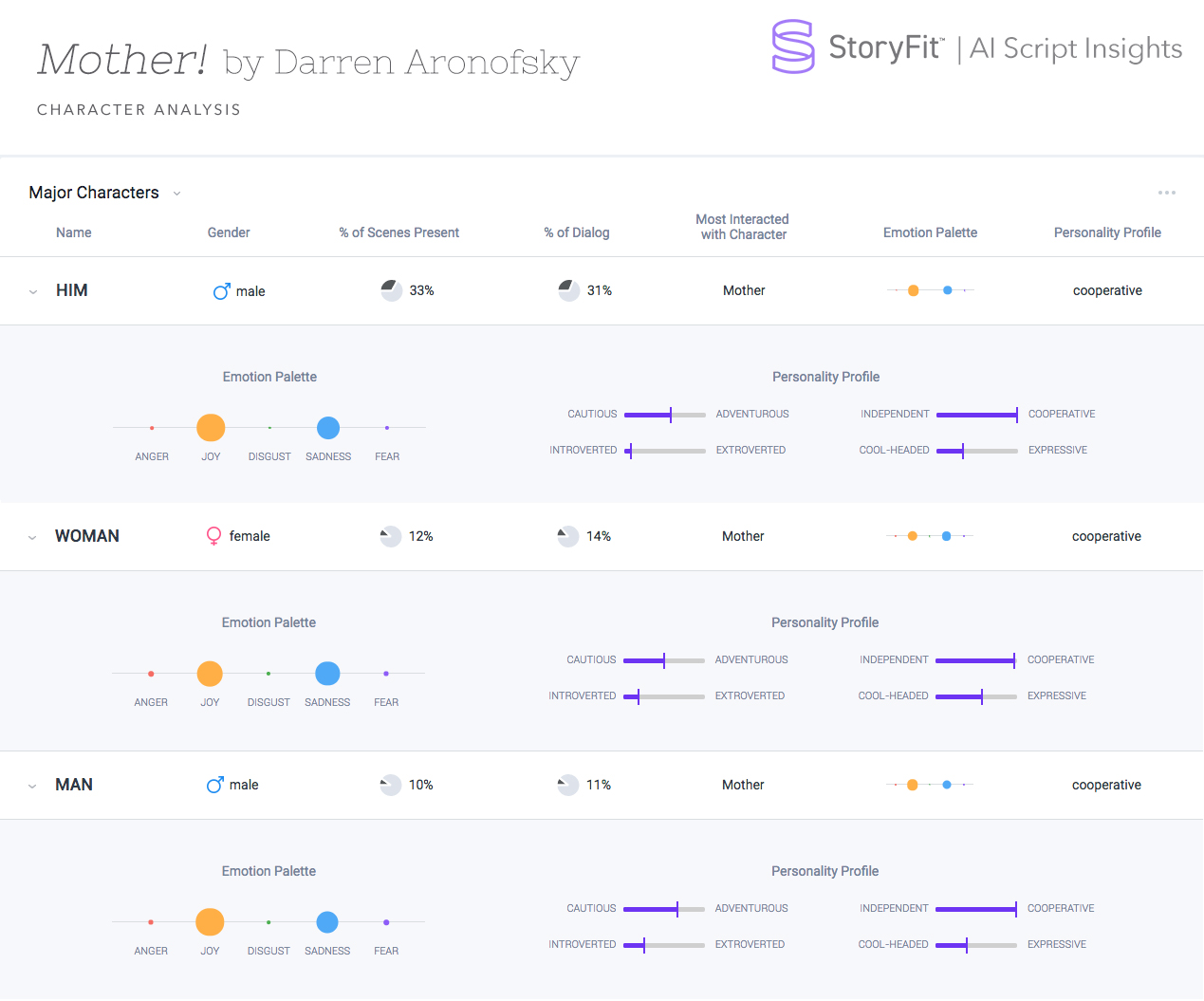